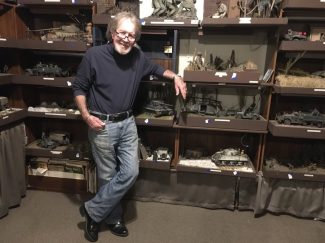 The Fairfield Art Association announces an exhibit just in time for Veteran’s Day. Mike Carlson is the creator of dozens of to scale size dioramas he will share in the Main Gallery of the Fairfield Arts & Convention Center. The display opens to the public on Friday November 5 and runs through November 12. A reception will be held from 6:30-8:30 PM on theÂ First FridayÂ Art Walk night of Nov. 5.

According to Mikeâ€™s sister Sheryl Payne, his interest in art began as a young boy sitting at theirÂ parentsâ€™ kitchen table for hours assembling and painting models, as well as drawing cartoons inspired by MAD magazine.Â  When not doing that, he and his friends gathered their toy soldiers for battles in his dadâ€™s pasture.

Mikeâ€™s love for art continued through high school, nurtured by art teacher Bob Glocke. After high school, Mike joined the local National Guard unit and, after returning from basic training, he enrolled at Parsons College graduating with a bachelorâ€™s degree in art/history.Â  Required to graduate as an art major, he had a one man show with paintings done on canvas. He started Carlson Concrete Specialists in the mid seventies becoming well known for residential basements and driveways, as well as parking lots and commercial work for local manufacturers. He retired and closed his business in 2013.

Mike began creating dioramas in the mid-eighties while his interest in art and war history continued to grow. He also was inspired by the recollections from his father, Jack Carlson, and his uncle Don McKee.Â  Both served in the European Theater during WWII, with Uncle Don being in the 3rd Armored Division at the Battle of the Bulge. Mikeâ€™s love of reading war history encouraged him to create 3D images. He felt that dioramas better depicted the horrors of war, as well as the heroism and sacrifices made by our armed forces and their families. He had a room in his house dedicated to his hobbies and was able to display his earlier dioramas. That house was totally destroyed by fire in 2014, but since then he has recreated and created overÂ  50 dioramas that currently line the walls of his hobby room. He has said more than once, â€śThatâ€™s it – Iâ€™m out of space!â€ť Then another war history book is read and another story needs to be told, so there is rearranging and more space found!

The dioramas are done in 1/18 or 1/6 scale with much imagination and detail, including hand painting and detailing the figures, vehicles, and structures, to make them look as realistic as the photos he has seen and stories he has read of actual events. Mike uses acrylic paints, balsa wood, and natural foliage. Paper-mache and foam insulation create variances in landscape elevation and terrain. The dioramas range in size from 14â€ť deep by 14â€ť wide to 18â€ť deep by 40â€ť wide. He has created dioramas for different battles and scenes from the Civil War, WWI, WWII, the Korean conflict and the Vietnam conflict, as well as some non-military dioramas. Dioramas vary in the time they take to create, anywhere from one week to more than one month, depending on size and detail. Mike has also collected 16 WWII, 1/18 scale aircraft which he has highly detailed and weathered for realism.