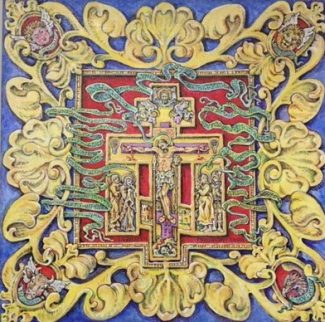 an exhibit several decades in the making by local artist Mark Shafer.

ery at the Fairfield Arts & Convention Center and is open to the public for viewing during the facilityâ€™s business hours Monday â€“ Friday from 9 AM â€“ 5 PM.

Please remember to wear a mask and social distance inside. A reception for the artist will be held in the future on a date to be determined.

Mark Shaferâ€™s first drawing lesson took place in his Grandpa Summersâ€™ lap. After mastering the anatomy of a cowâ€™s hind leg, Shafer moved on to embrace other subject matter.

This show explores local architecture, the Polio Pandemic, Greek Mythology, Native American Culture, Christian Iconography and Chickens, with explicit written descriptions of pieces. Shaferâ€™s work tells a story and incorporates a multitude of images with deep meaning in each one.

Shafer was raised on a farm north of Fairfield and is a 1967 graduate of FHS. He studied art at the University of Iowa and abroad. In 1972 he married Susan Anderson. He taught Art and Special Education in the Fairfield Schools for 34 years. Mark was a founding member of the Fairfield Art Association in 1966 as its youngest member and went on to serve as a board member several years. His previous FAA one man show was in the organizationâ€™s old gallery in the basement of the Carnegie Building in 1976 and featured the original drawings for his popular book â€śFairfield at the Turn of the (19th) Centuryâ€ť.

Shafer serves on the local Historical Preservation Commission and received Fairfieldâ€™s citizen of the year award in 2006 for his many community contributions. In receiving that honor, he was described as â€śa truly gifted individual, with a wonderful sense of humor and great attitude towards life and is a community treasure. With an expertise in so many areas, he is constantly called upon for facts, educated opinions and colorful anecdotes from a vast store of knowledge.â€ť

The Fairfield Entrepreneursâ€™ Hall of Fame Portraits were painted by Shafer and hang in the Executive Conference room at the FACC. Since his retirement in 2008 Shafer has directed the Carnegie Historical Museum.