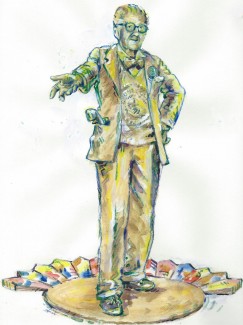 on the lawn of the

All the artists will be present and the event is timed to coordinate with the Parson College Wall of Honor induction weekend. Gobble was a Parsons College trustee and beloved by college students through the years.

The evening of the unveiling will be an event Lee would have liked to attend, with him in the midst of lots going on â€“ the FAAâ€™s new exhibit â€śIowa Art Quiltersâ€ť will be opening in the Main Gallery, and the Northside Strippersâ€™ Quilt Show will be in the Expo Hall, along with Fairfieldâ€™s Oktoberfest.

We can see Lee smiling,

just as he did one of the last times

it was mentioned in conversation with himÂ

about an idea for a future sculpture.

This project was initiated in the summer of 2015, shortly after the passing of Gobble at the age of 101. Five artists were selected by the FAA board to work on this life size art piece and includes the same artist, Christopher Bennett, who was commissioned to create the bronze â€śWilliam Coop & Friendâ€ť in the Fairfield town square, and â€śLeapfrogâ€ť on the Carnegie Museum lawn. Â

SEE MORE about ofÂ How this ALLÂ EVOLVED

Mark Shafer, artist and local museum director, immediately became involved to help create the historically accurate elements for the sculpture design and later provide the hand drawn and water colored pictures for Â translation into the tile base by another artist Harri Aalto. A second accomplished sculptor and Fairfield native, Ken Rowe was asked to sculpt the head and hands of Gobble for an unusual joint venture between artists. Bennett created the full body in a set up studio area in the lobby of the FA&CC for the public to view for several months. The fifth artist involved is Werner Elmker, local photographer , who has documented this art project from the start. Together they have created a grand tribute to â€śMr. Fairfieldâ€ť as the community came to call Lee T. Gobble ll.

This art project was supported in part by the Iowa Arts Council, a division of the Iowa Department of Cultural Affairs, and the National Endowment for the Arts. All donors will be recognized by an appropriate plaque. The only funds left to raise will be for some landscaping around the base next spring.

We hope everyone that knew Lee Gobble, and has a story to share, will bring it in a written format to the unveiling ceremony, or email it toÂ suzan1252@aol.comÂ Â Â These stories will be collected and used to create a booklet about â€śMr. Fairfield â€“ Lee T. Gobbleâ€ť and will enhance the appreciation of the sculpture for years to come.