The Fairfield Arts Association‚Äôs purpose is to increase the accessibility and appreciation of the arts in the Fairfield community by offering classes, exhibits and community projects to people of all ages. 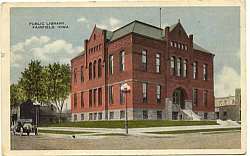 The Fairfield Art Association was formed in the spring of 1966 as a civic organization to foster art in Fairfield and the surrounding area. Thanks to a generous donation from Mr. and Mrs. Charles Herring which was designated for the building of an art gallery and studio, the FAA was originally housed in the Carnegie Library.

Many noteworthy events have been sponsored by the FAA over the years, such as the annual Dorothy Bell Garden Tour, the Holiday Art Fair, and the annual summer Art Camp for area school children.

The FAA has also sponsored several major art commissions in the community, including ‚ÄúWilliam Coop & Friend‚Äù, a bronze statue by Christopher Bennett located in the Fairfield Square; the ‚ÄúLeapfrog‚Äù bronze sculpture on the Carnegie lawn, also by Bennett; and ‚ÄúImagine A Water Journey‚Äù fabric mural by Jodi Kanter, located at the indoor Aquatic Center.

Additional FAA projects include a mural by Mark Shafer & Art Association members, ‚ÄúFairfield Square 1800‚Äôs‚Äù, housed in the Senior Center, two art projects by Judy Bales installed on area biking and hiking trails, and the mural on the back side of Sondheim Theatre.

An annual art scholarship is awarded by the FAA to a local student planning on furthering his/her artistic studies at the university level.

Beginning in 2009, an annual art installation began in the downtown area, with the ‚ÄúMy Fair(field) Ladies‚Äù mannequins, created by local artists and featured in Iowan Magazine. The following summer‚Äôs installation was ‚ÄúBirdhouse Art‚Äù, and for the 2010 holiday season, 4 original art Gingerbread Houses were installed, with plans to increase this number each year. Look for a unique ‚ÄúChairs‚Äù exhibit downtown in summer of 2011.

Now residing in the new Fairfield Arts & Convention Center building at 200 North Main Street, the FAA has a full sized studio for classes and workshops, as well as a member‚Äôs Sales Gallery. Additional FAA galleries within the FACC include the Permanent Collection in the Corridor Hall Gallery, a Main Gallery featuring monthly exhibits of Iowa, Regional and National artists, and in the Executive Conference Room is an ‚ÄúEntrepreneur Hall of Fame Portraits‚Äù exhibit by Mark Shafer, as well as a display of Ben Taylor art.

The FAA is a non-profit organization supported by memberships, memorials & donations. 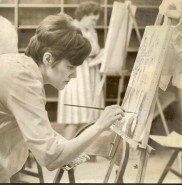 “William Henry Coop and Friend” a bronze sculpture by Christopher Bennett, was commissioned by the FAA. This piece is located in Fairfield’s Central Park Square, and represents the first pioneer child born in Jefferson County. It was dedicated and given to the city of Fairfield on July 14, 1981.

“Leapfrog” a bronze sculpture by Christopher Bennett, commissioned by the FAA and given to the city of Fairfield. The price was $45,000 and took five years from conception to installation. This art work is located on the lawn of the Carnegie Building, which was home to the FAA from 1966 – 2007.

“Imagine a Water Journey” is a large fabric mural by Jodi Kanter, Ohio artist, who was selected after a Call for Entries Competition. It was commissioned, at a price of $19,000, by the FAA to be placed in the Roosevelt Recreation Center’s Aquatic Center – also a gift to the Fairfield Community.

Suzan Kessel is past president & co-founder of the Fairfield Arts & Convention Center, is currently Ex-Officio member, and is a member of the Fairfield Beautification Commission. Suzan also served 12 years as FPAC TV Station Manager and was past State Coordinator of Iowa Artists, and was named Fairfield Citizen of Year in 1997.

David Kraemer began his teaching career in 1996, after graduating from Iowa State University with a Bachelor of Fine Arts and receiving his teaching degree from the University of Iowa. He has taught in both Minnesota and Iowa, and has been teaching art at the Fairfield High School since 2008.

David enjoys spending time with his wife and three daughters and continues to create his own artwork in a variety of mediums.

Makenzie Kessel was born and raised in Fairfield, and attended college at the University of Iowa. After graduating in 2005 with a degree in Communication.

She moved back to Fairfield and began working in the family Insurance business, Farm Bureau Financial Services, as Human Resources director.

Makenzie is an active artist with media preferences in book-binding, graphic design and cartooning, although her artistic endeavors began with paint and canvas

Deb was born in Cedar Rapids, Iowa, and has been a resident of Fairfield for 32 years. She was the Office Manager at the Fairfield Golf & Country Club from 1990-2007, and is now enjoying retirement by spending time with her grandchildren and countless crafting projects. Deb has an Associate‚Äôs degree in Accounting from the American Institute of Business in Des Moines.

She is a second time Board Member and enjoys the work she does for the Art Association.

‚ÄúIt gives me a chance to expand my creative side and work with the board to make ART in Fairfield fun and interesting.”

Kella j. currently works in her home artist studio in Fairfield and periodically teaches. She explores various mediums through the medias of drawing, painting and printmaking. She is an active board member of Fairfield Art Association and a member of Morningstar Studio Human Figure Drawing Group in Fairfield.

Her delight is living and enjoying her family, Dorae, David, Dalton, Drake, and Dallen Rippey, in the community¬Ýof family and friends of Fairfield.¬Ý Kella comments, ‚ÄúMother/Daughter and NaNa times are irreplaceable.‚Äù

Alexis Clements is a photographer and member of the faculty in the visual arts department at Indian Hills Community College. Originally from Missouri, she began her career in Denver, CO before moving to Fairfield, IA. Alexis‚Äô photographic projects culminate into books that¬Ýinvestigate the relationship where words and images converge, where memories become mythologies, and how environments contribute to¬Ýpersonal narratives. Alexis exhibited her photobooks in Los Angeles, Atlanta, and Athens, Greece.¬Ý

¬Ý
When not teaching or photographing, Alexis can be found studying classical guitar and hiking with her dogs.

John Preston is a full time artist and has been painting the Iowa landscape for 26 years. Considered one of the Midwest’s major landscape painters, his work is in public and private collections throughout the US, including the Chicago Federal Reserve, Amoco Oil, Equitable of Iowa, Pioneer Hi-Bred International, and Iowa State University, as well as other banks, museums and businesses.

John‚Äôs wife, Cindy, is a past member of the FAA board and enjoys a variety of fiber related arts.

Eileen Hawthorne has been a member of the Fairfield community for 28 years.
Born and raised on the east coast. Eileen holds an A.A.S degree in Advertising Art and Design and has worked for Ad agencies in New York, New Jersey and San Diego and was an Art Director for AT&T’s Marketing and Art department at their headquarters in Morristown, NJ.

After starting a family (Brian) with her husband David, they started their own freelance Ad Agency in San Diego with over 15 clients.
She and David moved to Fairfield in 1986 and had 2 more children, Sara and Galen.

Eileen began her Fine Arts education about 5 years ago at the FAA and has been studying and learning from the many talented professional artists in the Fairfield Arts.

Jan B√∂rk and husband Bob are graduates of the University of Kansas, and have lived innumerous locations throughout the Midwest.

After living in Minnesota for 20 years, Bob retired from New York Life, and they moved to Fairfield in 2011. They have 2 grown sons. Until her recent retirement, Jan worked at Cambridge Investment Research, Inc.

Jan enjoys card making, various crafts and decorative arts, and reading. Now that she is retired, she looks forward to exploring volunteer opportunities in the community.

Werner Elmker is a man of many talents. He has been fascinated by the medias of film and music since he was 13 years old. At that time he started rigorous training in piano performance and the fine art of photography. Twelve years later, he received a doctoral level degree in piano performance and pedagogy from the Royal Danish Conservatory of Music.

He moved to Fairfield, Iowa in 1985, where he was teaching music at the local college for twelve years. In 1998 he started a private music studio, teaching piano and recording 15 CDs of original and classical piano music.

Communications and media undergraduate student at Maharishi University of Management with background in writing, directing, filming and editing.¬Ý
Experienced working on both large projects, and shorter skits, with an emphasis in comedy.

My goal is to create a film team, similar to that of, College Humor, Rooster Teeth, and the Philip Defranco Show. a website where one can go to satisfy all those technological entertainment desires: News, Comedy, Art, Vlogging, and Blogging.

“I enjoy editing, filming, and working with my enviornment to succeed with¬Ý the task at hand.”